The Zone is designed to work as a vehicle for creating wild stories—even if it's just by yourself!

Known limitations of the Digital version in Solo Play

The Digital version of The Zone has a few limitations in solo play that will not be present in print, because it was originally programmed with multiplayer in mind and it will be a rather large (but exciting) challenge to write alternate copy for so many parts of the user interface. I plan to

The overall structure of The Zone stays identical in Solo Play. You are still a doomed expedition, and if you bring multiple characters in only one of them will survive, with their deaths pre-determined by Fate Cards. The only difference is how to use the KEY MOVES and what happens in the Endgame.

As with all rules these are a scaffolding to help you with your storytelling. If you don't need a piece of structure, don't use it!

Just like in multiplayer, solo play casts you as the Director of this surreal horror movie. You may choose to use the SCENES that you pull as prompts for your own freeform storytelling or journaling, much like index cards in a script breakdown or chapters in a book.

When playing solo, it's a good idea to follow the key moves in sequence as you won't have the interplay with other players to trigger them. Suggested running order:

Pull the SCENE card. Set it up, along with the location if needed. How did the Expedition get here? Who is in the Scene?

Sets up the core conflict of the scene

Develop the core conflict until you are able to justify something hard enough for your characters to overcome to pull a NOT SO EASY card. Resolve the NOT SO EASY card and its consequences

Continue escalating as needed, or until the SCENE prompt has been addressed

# Notes on the Key Moves

Explicitly TAKE STOCK at the start and end of every SCENE, trying to add 3-5 details.

This move works exactly the same in solo play as in multiplayer, except that you will play both sides of it. Say "Something's Not Right", describe what it is, and then complete the sentence that starts with "It's Worse Than That..."

It may seem redundant, but that sentence structure is guaranteed to escalate the Scene. Treat it like a ritual phrase.

This works just like in multiplayer—even with other players you could always call one of these on yourself. Whenever something a character tries to do something that is too hard for them, take a Not So Easy card and use it to find out what happens.

You should have at least 7 Not So Easy cards, or more if you escalated multiple times. When you reach the Center, you will lay them out, state your Wish, and then let The Zone decide by choosing one of them at random.

I love The Zone as a solo journalling game. For something that is inspired by Annihilation, I hope many pages are filled in this way...

“When I saw those hundreds of journals I felt for a long moment that I had become that old biologist after all. That's how the madness of the world tries to colonize you from the outside in, forcing you to live in it's reality.” — Annihilation

# Example in the physical version

This is an example of the setup for a Stalker style solo mission, with a Scientist, Chaplain, and Writer. Note how each of them has a Phobia and Obsession defining them.

When playing solo I quite like to leave the scene cards that I played laid over the locations, so I can see the journey at a glance. You can see that the Scientist and Writer met their fates, and the Chaplain has made it to the Center. 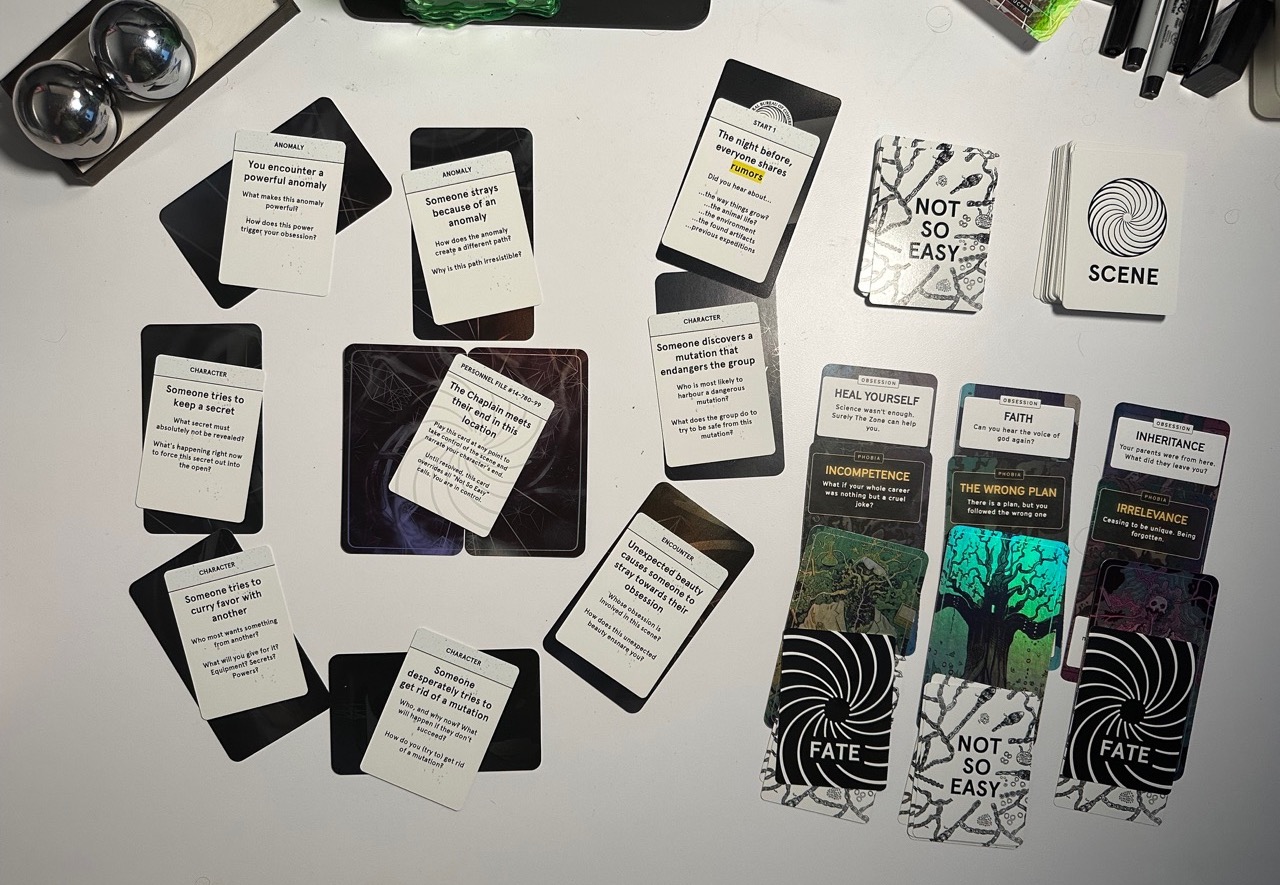 Their Obsession was to hear the voice of god again, but it wasn't quite so easy... The Zone, represented by the Chaplain's Not So Easy cards, said NO, AND... (well, that last part, you'll have to fill it yourself 😉 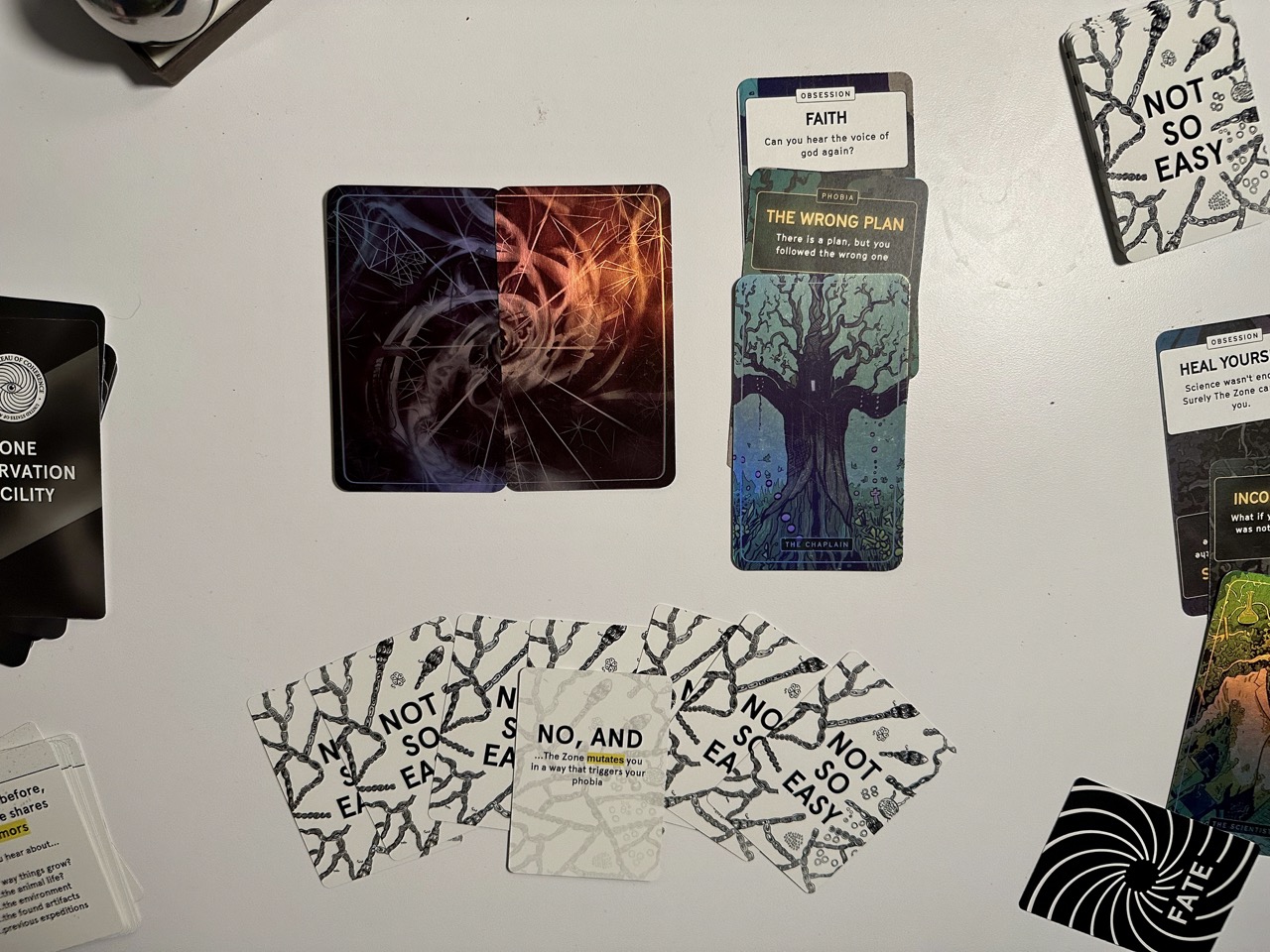