# The goal of this game is to tell a weird, magical realist horror story of mutation and self discovery. A story about people who risk everything for an obsession. A story where only one will make it to the end...

Welcome, volunteers. I know you've all been wondering what The Zone really is, and if the rumors are true. As the 14th expedition, you deserve to know what we know. It's not a lot. But it may help you.

It all started with the anomalies. Locals calling in to talk radio or visiting their doctors with stories of unseasonal weather; impossible objects; half-sightings of unknown creatures; claimed conversations with long dead loved ones. People disappeared. Medical notes describe bodies that started... changing.

We initiated special containment procedures. Performed tests on those who refused to evacuate. Then, as if reacting to our attention, The Boundary appeared and isolated everything and everyone within an area of several square miles. We don’t know if there are still survivors. Or if they're still human.

Since that moment, not a single expedition has returned. All lose contact minutes after leaving visual range. We're going on fragments, rumors, and occasional anomalies that seep beyond The Boundary.

We don’t know what The Zone wants—or if it wants. It seems to be a mirror. It manifests whatever Phobias, Obsessions, and Memories you bring into it. The Zone brings them to life to test you.

There are rumors that The Zone can grant your deepest Wish if it deems you worthy. Sensor readings show something incredibly powerful at its heart. Perhaps the only escape is the The Center itself.

You are the 14th Expedition. You will almost certainly not return. Good hunting. But prepare to die. The Federal Bureau of Coherence, without admitting liability, thanks you for accepting this mission.

# This is a collaborative storytelling game

The game is a series of scenes, which we can choose to play in as much or as little detail as we want, describing or acting out what characters are doing. Scenes can be as short as couple minutes, but usually ~5 minutes or so. The game will last about as long as a movie.

# 2. We will take turns being the director

There is no GM. We take turns as director setting up and ending scenes, and all share a few key moves that anyone can trigger at any time to help the story along. No one will be forced to be on the spot for long. We're each in charge of our characters, but share responsibility for everything else.

We are not competing with each other. That's why our fates are secretly decided at the start, so we can focus on creating not so easy situations which characters will always take the bait on... and suffer the consequences. You know those moments that have you yelling "DON'T GO IN THERE!" or "DON'T TOUCH THAT!" at your favorite horror film? That's this entire game.

# How long will the game last?

A game of The Zone takes 2-4 hours, depending on the number of players and how quickly you move through the scenes. The sweet spot is 4 players and about 3 hours, including rules and character creation.

If your scenes are mins long, and you do per location, the game will last about 3h 20m

I did a not very scientific analysis of 2 months of games of The Zone and tweeted about it here (opens new window). You can see how wide the range of games is, but it does seem to cluster around that 2-3 hour mark (or approximately one "Rogue One").

Controlling the length of the game

The Zone is GM-less from a storytelling perspective and takes on much of the facilitator's job of teaching the rules and running the game. The recommended way to play is to give yourself a spacious 3-4 hours and let the atmosphere sprawl. If you want the game to fit in a particular amount of time someone will have to play the role of Time Facilitator.

For a fast game (2 hours or less if you facilitate hard):

If it's your first time facilitating with this group, use The Zone Observation Facility as a diagnostic. Some groups love to sink into it and will roleplay for half an hour, letting their characters get to know each other and sharing rumors.

Rule of thumb: the whole game will last about (Length of first scene / 3) hours 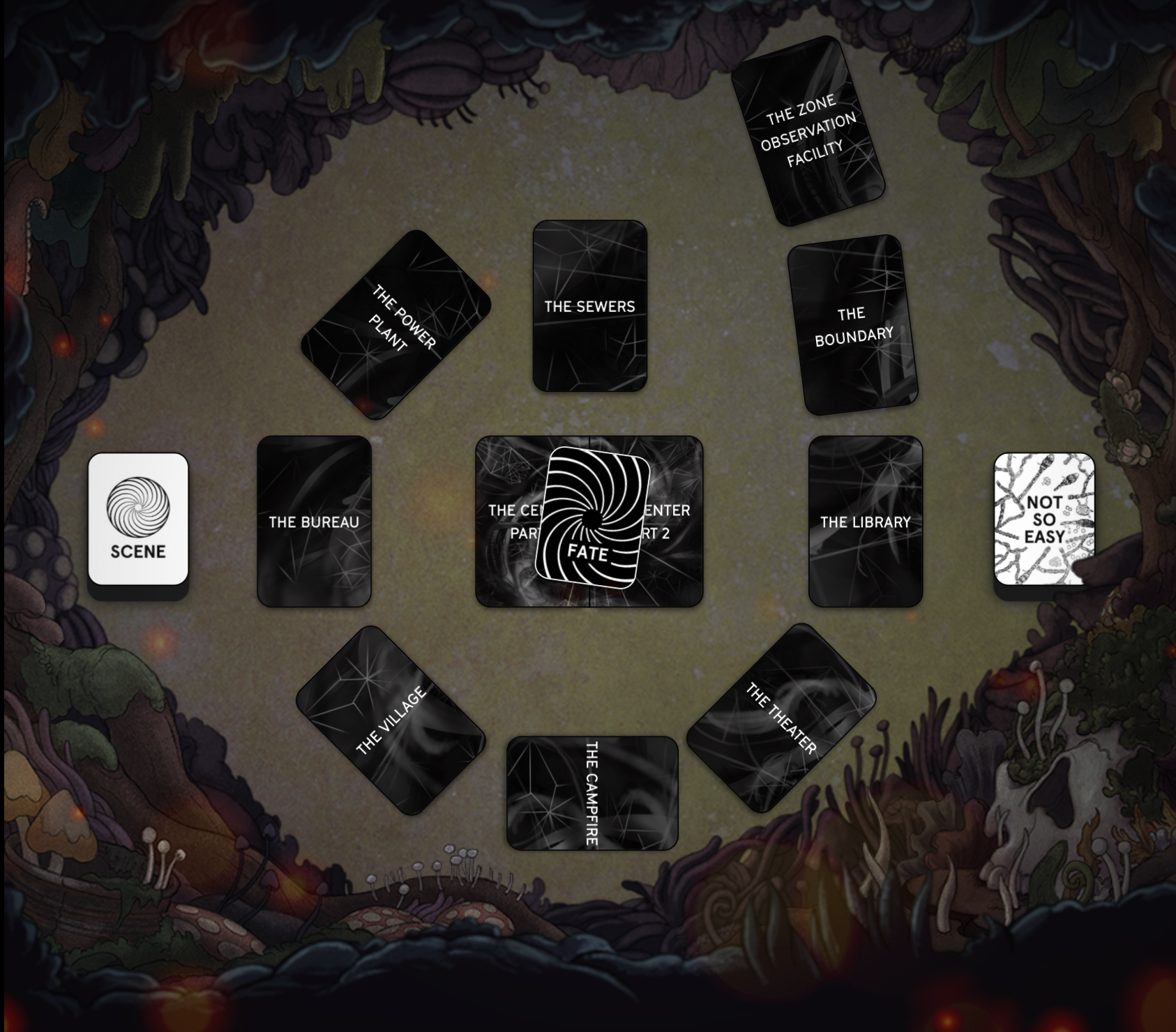 Unless explicitly stated otherwise, we can all see roughly the same things on our screens. If there's something only you can see, it will say " Only you are seeing this"

# The Spiral (of Locations Cards)

# Not So Easy Cards

# This is a horror game, so it’s most fun when we take our characters way out of their comfort zones while taking excellent care of we, the humans playing them.

If something comes up in the story and we’d rather it didn’t, we'll press the X-CARD button (find and press it now!) and rewind to find another way, no questions asked. We can even X Card ourselves. Credit for the X-Card goes to John Stavropoulos (opens new window)

There will times a player is pondering a question and helping them feels sooooo irresistible! We won't give in! Sometimes, folks need a little time to think... and the creepiest horrors need their time to gestate.

We each have ironclad authority over our characters and when setting scenes up as Director. It's still fun to suggest ideas and “Yes, And...” a lot, but no pressure! If it's not an obvious “Hell yeah!”, no need to push it.

# 4. The players are more important than the game

That! ⬏ Take care of the real humans first. My friends, let's be excellent to each other

The game will guide you through an anonymous voting exercise where everyone can express where on the intensity spectrum this story should be, from PG-13 to R-Rated.

Mutation and 'death' is core to The Zone, but the way it's told could be as much bloodsoaked B-movie as magical realist spiriting away. Are there horror (or other) reference points we're excited to see in this game?

We'll have the X-Card if something comes up during the game, so no need to dwell here if nothing comes to mind. If you'd like a more formal activity, I'd suggest Lines & Veils (opens new window)

How much time to spend in this section

How long you spend in this sections depends a lot on how well you know each other already—perhaps you're a seasoned group of horror fans who have delved into the genre together for years. Or maybe you're playing with a bunch of complete strangers at a convention.

The situation to watch out for the most is one where most of you know each other, but not all of you. This is where it's easiest for someone to feel left out, or worse be carried by the rest of a tightly bonded group into the place they'd rather not go.

🌈 Tip: calibration exercises aren't just about avoiding bad things, they're about building trust, rapport, and learning what people love so you can drive the story in those directions! If you only prime the group to think about all the things you don't want, it can be harder to end up where you do want to go.

← I'm having a problem! Characters →